Elijah & the Prophets of Baal Showdown

My name is Jitendra. I am a Gospel minister and field coordinator with WIN Life. In July one of our village pastors invited me to lead a evangelistic healing outreach. Though I am not allowed by my doctor to drive my motorcycle long distances due to a head injury, I felt compelled to go and reached the location after 2 ½ hours of continuous driving. The event had been organized right in front of the pastor’s house as there was a large open area where the people could sit. The tent, sound system, musicians, and mats for the people to sit on were already in place and the crowd began to swell.

The time came for me to lead the audience into praise and worship. The Spirit of God came in such power that the whole group including men, women and children began singing and dancing and praising God. It was a glorious celebration of God’s love and power. Then I had the people sit down and I began to preach my sermon.

Just when I had begun to preach, a mob of men with sticks in their hands came charging at us. They were headed right for the platform where I was, pushing and shoving people out of their way. I could see the white fury in the eyes of the angry men as they approached, brandishing their sticks. It was clear they had identified me as the main leader and wanted to beat me up.

Just then I felt someone grabbing my arms from the back and pulling me down from the platform and behind the tent. It was the pastor who had organized the event. He told me to run into his house and lock the door and not open it until told to do so. All this happened so quickly, I could not even think. I rushed into the pastor’s house where some other believers were also being hidden, and locked the door.

From the window I could see the mob shouting and hitting people with their sticks. The pastor was also being beaten up, yet I could not do anything to help him. I felt so bad and so helpless. A few of the ladies who were in the same room began to cry and make a lot of noise. I managed to calm them down and asked them to pray instead of shout. We knelt and began to pour out our hearts to the Lord for His mercy and help. About that time some policemen arrived. Within a few minutes they had stopped the mob’s rampage and calmed everyone down. The mob stood on one side of the area shouting praises to their gods and goddesses, while the believers stood across from them shouting praises to Jesus.

Just then two women from the crowd began convulsing and twisting their bodies and fell to the ground in front of all who were present. The two women were manifesting demonic possession. A woman from Pastor Sanjay’s church stepped forward and with holy boldness, shouted to the mob, “Take these ladies and pray to your gods and let’s see if your gods can heal them and make them well! Let’s see if your gods have any power! If your gods can’t deliver them, then we’ll pray to our God to deliver them.” This was an open challenge to prove whose God was able to deliver and heal. The police found the proposition most amusing and ordered the crowd to comply. When I heard of this challenge, I remembered the story in the Bible of Elijah and the prophets of Baal and realized I was experiencing a similar power showdown! All of us who were locked inside the room began to pray fervently, asking God to perform a miracle.

So the demon possessed ladies, screaming and flailing their arms, were laid in front of the mobsters who lifted up their voices to their gods and goddesses and started chanting religious mantras over them. This went on for quite a while and nothing they did brought about any change in the ladies. The ladies continued to writhe about on the ground while the shouting and chanting of the mobsters became increasingly frantic.

Then the police declared the mobsters had had their chance and it was the believers’ turn. The believers came forward and stood over the ladies. The Living Lord did not let us down and sure enough, as soon as the whole congregation of believers began to pray over the ladies, both got up from the floor and sat upright, peaceful and fully delivered. 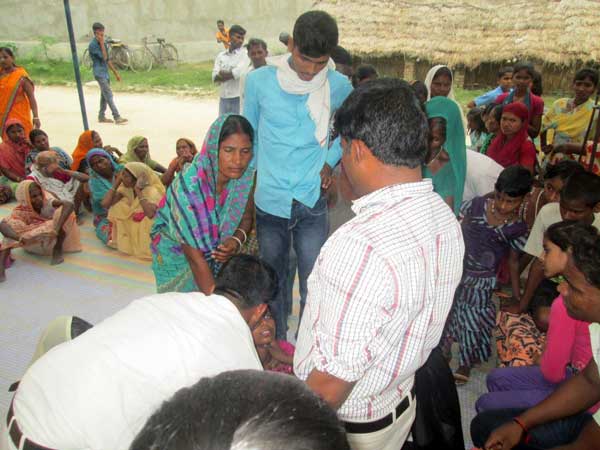 The believers delivering the ladies of the demons

Seeing the amazing power of the name of Jesus, the police became incensed at the mob who had attacked the believers. Turning on the mob, the police yanked the sticks out of their hands and began to thrash them with their own weapons! Then the police grabbed a few of the mobsters and dragged them off to the jail. The police also took the pastor along with them to the police station but not to arrest or abuse him; they wanted him to pray for the police staff and all those at the police station! One policeman begged the pastor to come to his home and pray for his sick bedridden mother.

Thus the name of the Lord was glorified in the midst of persecution and anguish. The Lord is indeed faithful to His people. Today, that whole village bears witness to the Living God and praises Him wholeheartedly. The Lord will never leave nor forsake His people!